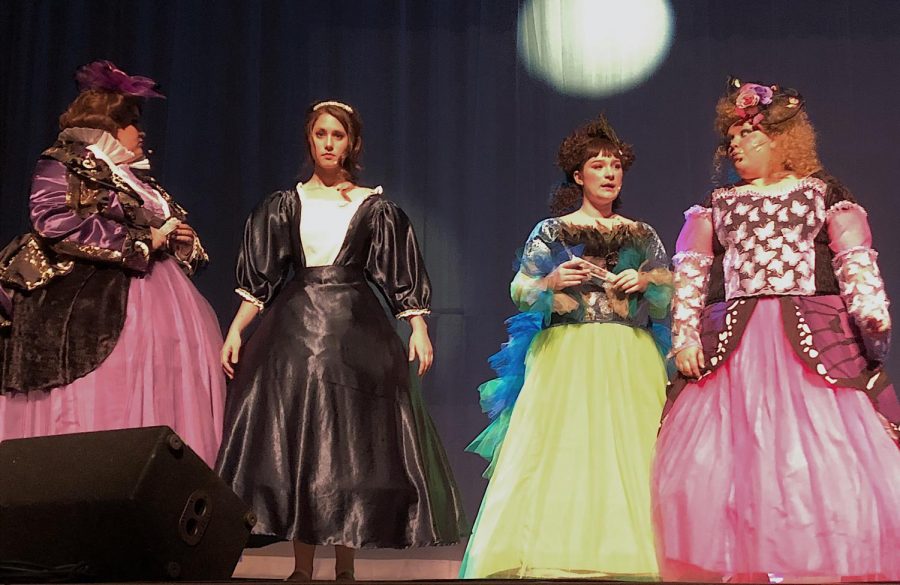 The Severna Park High School Stage Company has started shows for “Cinderella.” The show includes some new elements, making it even more exciting to watch.

The show is not performed by only high schoolers, though. In the prologue, there are elementary school girls who play the role of a younger Cinderella. They were chosen by a writing contest, where they responded to a prompt about a time they were brave and kind. Six girls were chosen for the role, one for each show. These girls were able to pick up their part very easily and perform it well, despite the fact that they had just one rehearsal to do so.

The technical elements of the show are overall very well put together. The costumes are so elaborate and look amazing on stage. Makeup and hair are all done by the students, and it all looks great. With the combination of costume, hair and makeup, each look is specific to every individual character, which is dazzling to see. The set is huge and it is built very sturdily, nothing fell apart (which is always a plus). There is so much detail, from the soda bottle banisters to the hidden images painted in the marble staircase. Lighting and sound were all very well executed, with the spotlights always on time and on the right person, and everything is able to be heard very well with the microphones on prominent characters. The band works very closely with the theater department, they learned and will perform every song in the production. The band also practices with the cast to make sure that every note is on time so there are no mistakes.

The show has some differences from the movie, although the plot is the same. The only major change is a few of the songs, but as those adjustments make it more musical and detailed, it is honestly better.

The performance of the students was absolutely astonishing. Everything felt incredibly real, so much so that when Cinderella was on the verge of tears, I was as well. The singing was on point and the singers with the band did so well keeping up with each other. My favorite part of the show is the reveal from Cinderella’s ripped dress to the new one she wears to the ball. This change is done on stage and was performed seamlessly. Cinderella’s animal friends also make a debut in the show, and it is so fun to see actual “animals” (puppets) on stage.

With all of these intricate elements put together, I highly recommend that you watch “Cinderella.” Shows are in the Severna Park High School auditorium on November 15, 16, 22 and 23 at 7pm, and on November 17 and 23 at 3 pm. Tickets can be found online at the SPHS Drama website or are sold at the door ($10 for students and seniors, $12 for adults).

All the proceeds from the shows benefits a local non profit – Hope For All.  An organization that provides for the needs of families leaving homeless shelters and entering transitional housing.