“Star Wars: Thrawn Ascendancy: Chaos Rising,” Should You Read It?

The first book in a new Thrawn adult trilogy by Timothy Zahn. 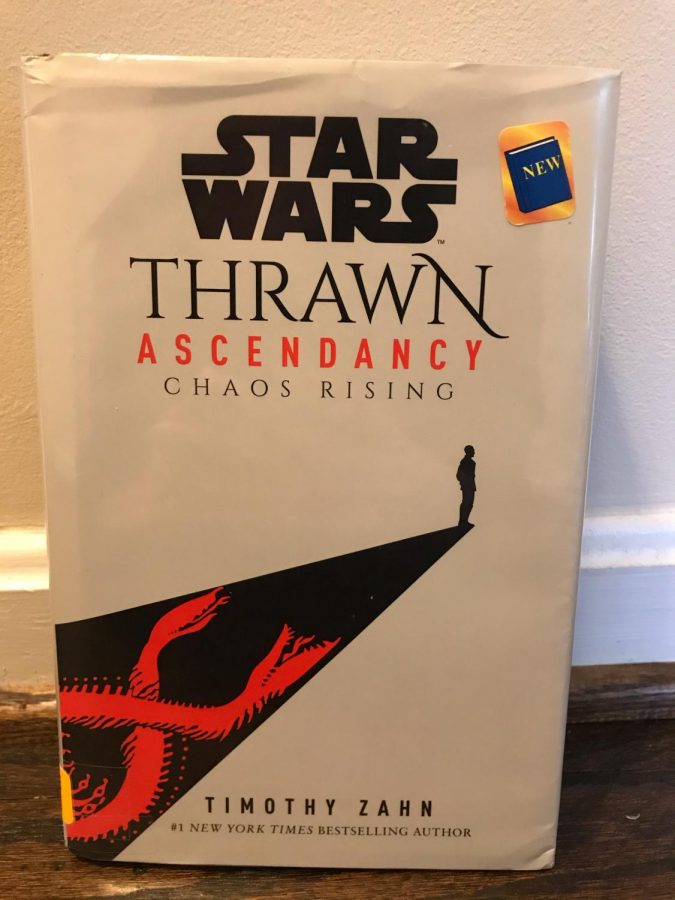 One of Anne Arundel County Public Library’s (AACPL) copies of the book is seen in the photo above, which one can check out using their library card. The book kicked off with a bang, since one of the worlds in the Ascendancy was attacked. Thrawn was the Chiss in charge of figuring out why it happened and who was responsible for the attack, and the reader was led through his investigations.

“Chaos Rising” kicks off the start of another Thrawn trilogy, and author Timothy Zahn succeeds in writing an engaging, interesting book. It explores parts of Thrawn’s life before he joined the Empire, specifically his life in the Ascendancy’s military, and the story maintains aspects of his character that had already been defined in Zahn’s previous Thrawn books.

The story revolves around a part of the galaxy that has rarely, if ever, been explored in the “Star Wars” universe-known as “The Chaos” in the book-and Zahn is able to create new worlds, societies and governments for the reader to delve into, including the Chiss; Thrawn’s species. His settings are descriptive, not only when giving the details of a location, but also when there is a conflict.

In addition to giving background for Thrawn, the book also looks into the past of other characters from the “Thrawn” trilogy that was started a few years ago in 2017. The new characters introduced in the story maintain the same personality and traits throughout, keeping them as realistic as they can be in a “Star Wars” novel.

Zahn is also able to keep the story suspenseful, making it unlikely for the reader to get bored, although there are some slow parts. The author tells the story in a unique way, switching between the past and present. It can be difficult to follow both plots at the same time, but most of the time the reader is able to remember what is going on or what has happened to get back in the loop. At some points the ‘flashbacks’ align with the main part of the story, which gives the reader additional background to Thrawn and the other characters.

There are also tie-ins to the previous Thrawn trilogy besides some of the same characters, and the reader is given more information about aspects of Thrawn’s missions that they wouldn’t have known before.

This book is unlike some of Zahn’s other Thrawn books in that Thrawn does not get a perspective, instead it is told from someone who is somehow connected to him. It would have been interesting to get inside Thrawn’s head and see his views that he doesn’t tell others, but not giving the reader that knowledge can add more surprises to the story.

There are some unanswered questions at the end of the book, but those will likely be answered in the future books in the trilogy. In addition, it ends on a cliffhanger, although the subsequent book was released on April 27 of this year.

Overall it was an entertaining read, and is definitely a book that Thrawn fans will enjoy, and will likely get an approval from someone who likes the overarching “Star Wars” universe.