“Eighth Grade” a movie about middle school that may be even worse than the real thing. 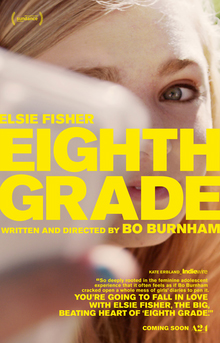 Main character Kayla in “Eighth Grade”  loves to post inspirational videos on YouTube. She posts advice that she often does not follow herself. Her lies and hypocrisy make her unlikable and the movie frustrating to watch. Making YouTube videos is a stage we all went through, but most of us were lucky enough to grow out of it - not Kayla.

It was hard to make it all the way through “Eighth Grade,” a coming of age story centered around eighth grader Kayla Day (Elise Fisher). The only redeeming quality of “Eighth Grade” is the stark depictions of middle school culture, but the agai, if middle school was not fun the first time around, why would you do it again?

By the end of the movie you will be pulling out your hair in frustration at Kayla’s, the socially inept eighth grader the story centers around, inability to speak coherently. Fisher’s acting belongs in an elementary school play. The social interactions among the characters are so tangibly awkward it becomes unbearable. Kayla and her father (Josh Hamilton) have no chemistry and the result is numerous creepy father-daughter interactions.

The cinematography is about the level of a high school production, it was shaky and nausea inducing. The soundtrack was even worse.  It seems that the director Bo Burnham has less than a juvenile understanding of film.

The film ends on a depressing yet somewhat hopeful note. But as the film does nothing to cultivate sympathy with the main character- it doesn’t really matter what happens to Kayla anyway.

If you are looking for a movie that takes you back to the struggles of adolescence, then this may be for you. This is not the usual coming of age story cast with supermodels and heartthrobs. This story is filled with prepubescent teenagers who can’t act. Instead of some eccentric film plot, this story centers on real life middle school problems. Movies are meant to be an escape from reality, not another version of it. “Eighth Grade” is unenjoyable, frustrating, and boring. Do not watch it.