The Model UN of SPHS

After a year of being away, the Model UN is back to having in-person conferences. 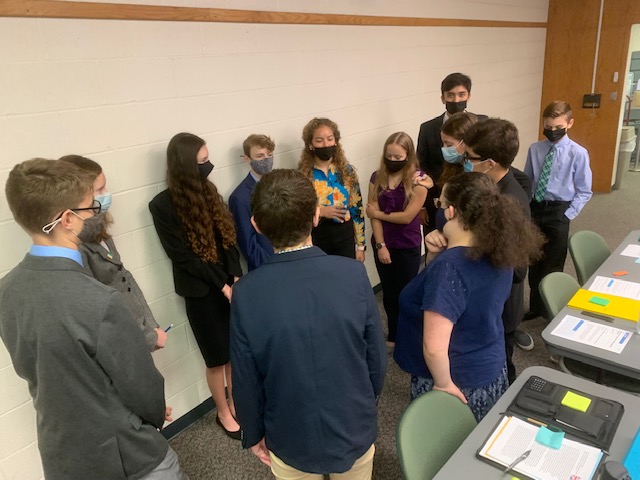 During the Severna Park Model UN Conference, delegates debated the usage of fracking. Most countries were in agreement on eliminating the energy source, but the USA and China were strongly opposed to the solution. “I found it fun getting to meet a bunch of new people and learning about the history of different countries and their positions on specific issues,” sophomore Galen Richardson said.

Every Thursday during Falcon Block, Mrs. Poole’s classroom is full of eager Model UN members discussing tactics and arguments regarding worldwide issues to prepare for major conferences. While the research may be tedious, the feeling of being in a room full of passionate delegates is worth it for many.

Students who join Model UN learn how to use important life skills, such as speaking to new people and debating. Members also have a great opportunity to learn about the world around them and to further their acting skills.

“I love getting to represent different countries and seeing people completely throw away their own beliefs and get really into character- to be completely fair and unbiased in representing a country,” junior Tyler Dickenson said.

During meetings, members listen closely as the club officers explain the specifics of how to write position papers, resolution papers, and how to win awards during conferences. While the air is light during these meetings, delegates take their roles seriously.

“I hope other schools- and the general model UN organization- recognize how well we’ve been doing,” Dickenson said. “We’ve really grown as a group. I’m proud of that.”

The first conference was on Oct. 16 and was run by seniors Zach McGrath and Ruby Schwartz. It went well for many of the club members, also known as delegates. During the conference, delegates debated the usage of fracking. Two resolution papers, or proposed solutions by the delegates, were passed.

“It was a huge success,” Schwartz said. “We had a pretty great turnout, everybody participated. It was pretty awesome.”

Now, the Model UN delegates are currently preparing for their next conference at Centennial High School on Nov. 13. This conference is pretty big according to Schwartz, with members of high schools all over Maryland coming to participate. During Falcon Block, the Severna Park delegates are practicing debating with each other to sharpen their skills.

“We usually do pretty well at Centennial,” Schwartz said. “I’m pretty confident in everybody’s ability to step up to the plate and do Severna Park proud in front of other schools.”