Our very own Player of the Year. 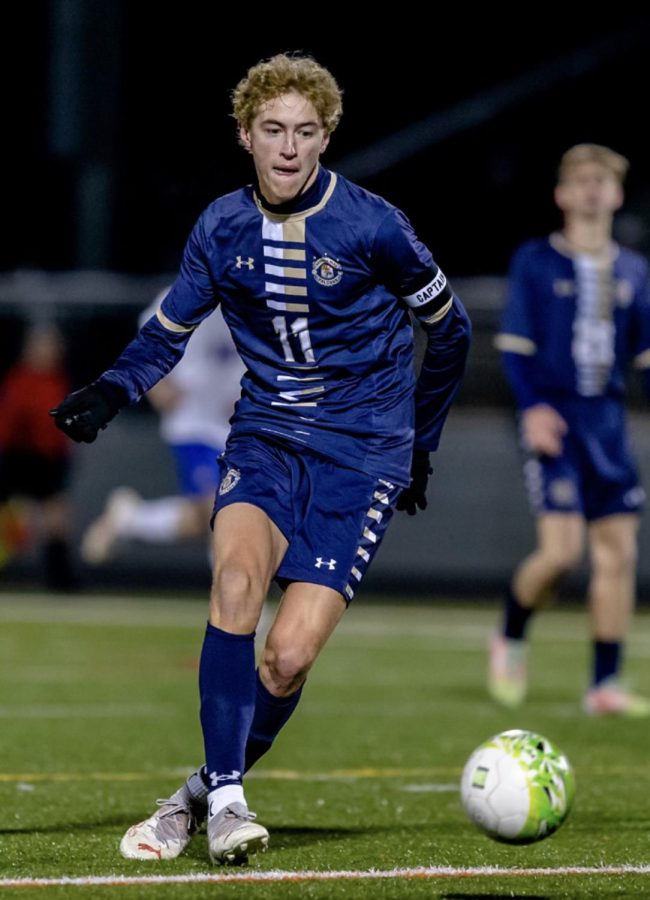 SPHS senior Gus Bachmann has been participating in soccer for over a decade. Over the course of this time, he has crossed paths with many who made a lasting impact on him and aided in his development as a player and a person. “I’d really like to thank my teammates for making these last four years of high school soccer such a great time,” Bachmann said. “I’d also like to show appreciation for Coach Ryan Parsi, who has always been a kind mentor to me in soccer, as well as [in] life.”

Being an East Coast high school, lacrosse is the first sport many people associate SPHS with. However, it is far from the only activity that breeds large crowds and success. SPHS Boys Varsity Soccer is on the rise following an outstanding season. A major contributor to this success was senior co-captain Gus Bachmann who has been part of boys soccer at SPHS for his entire high school career.

“I have always found the most enticing part of the sport [to be] the camaraderie and friendships you make by being on different teams,” Bachmann said on beginning participating in soccer at the age of six. “Especially because I was able to play on high level travel teams, I had the opportunity to meet a lot of different people from all walks of life.”

In December 2021, Bachmann received the Capital Gazette’s Player of the Year award for his performance in high school boys soccer.

“I feel ecstatic after receiving this award,” Bachmann said. “It feels like all my hard work up until my probable last year of playing soccer paid off and was validated. It also feels good because it came after a successful high school season in which we reached [the] semi-finals of the state playoffs.”

While he does love the sport in which he helped lead his team to a memorable season, Bachmann does not plan on pursuing a college career in soccer. However, he does plan to attend American University next year.

“I want to focus on  my academics and [I] plan on studying abroad,” Bachmann said. “I felt as though not having to deal with a frequent soccer schedule would let me focus on being more successful in school.”

Having played soccer for more than a decade, Bachmann has created many core memories with his teammates and developed valuable skills he will take with him to the next chapters of his life in college and beyond.

“Soccer has taught me to have composure and resiliency in the face of adversity,” Bachmann said. “Playing in high stakes situations, such as traveling to Belgium to play in a top flight tournament gave me experience in overcoming challenges through teamwork and determination.”