Senior twins separate for college after 18 years together. 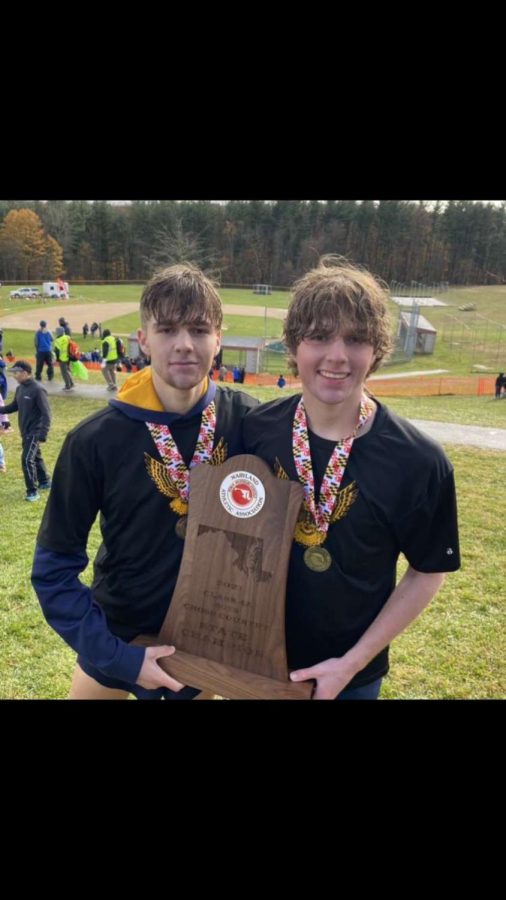 Being identical twins, Scott and Tyler Engleman have grown up side-by-side. They have been in classes together, as well as sports. This year they are even on the same track and field team. Separating next year will give each of them the ability to discover their identity without being asked which brother they are. ¨My whole life it's been that people meet me as a twin,¨ Tyler Engleman said. ¨But now when I meet people they'll have no idea and kind of just know me as an individual.¨

Leaving your family for college is hard enough for the average senior. However, as a twin there is another level of deep connection, a bond that is harder to break. As a twin myself, I know that separating from the person I have spent every second of my time on this Earth with is much more difficult than I thought it would be. Many seniors are in the same boat as well. Senior Tyler Engleman views having his brother as something very special.

“Growing up with a twin is awesome”, Tyler Engleman said. “It’s like having an automatic best friend. We were always in the same classes until 4th grade.”

For many seniors with older siblings, they are able to gradually experience life away from their childhood. They remain with their parents for some time while their siblings are off on their own before they themselves detach from their parents. Those with younger siblings seem to be excited to have independence and time to themselves. But for twins, they are leaving everyone in their family at the same time, including their best friend.

“I’m excited to get away,” senior Nicole Baker said. “But I will definitely miss her and keep in touch.”

On the other hand, though, separating from one another can provide an exhilarating time for self-discovery and identity. Scott Engleman is looking forward to being in a place where no one knows about his family.

“Leaving Tyler after high school will be exciting,” Scott Engleman said. “It’ll be interesting wherever I go no one will know I have a twin where here in high school, everybody knows I’m a twin.”

Maybe it is twin telepathy, but luckily for Scott, his brother feels the same way about this upcoming chapter in their lives. Similarly, Nicole Baker is looking forward to the new opportunities away from her sister, Neela and living a different life than her.

“We definitely want to go to separate colleges so we get the chance to explore our own interests without the pressure to stay together,” Baker said.

With these seniors paving their own paths for their adult lives in a new place, they will discover and create new goals, as well as meet many new people that they will soon call friends. However, no matter how many friendships they create, nothing will be near as close to the bond they have with their twin.

¨Having a twin by my side is different than having just having a friend go through it with me,¨ Tyler Engleman said. ¨It’s different because we´ve gone through all of life together, we have almost all the same experience so it’s nice to always have someone to relate to.¨

While these sets of twins do not have their future colleges set in stone, they are soaking in every moment they have with their siblings and families before they fly off to their independent lives.