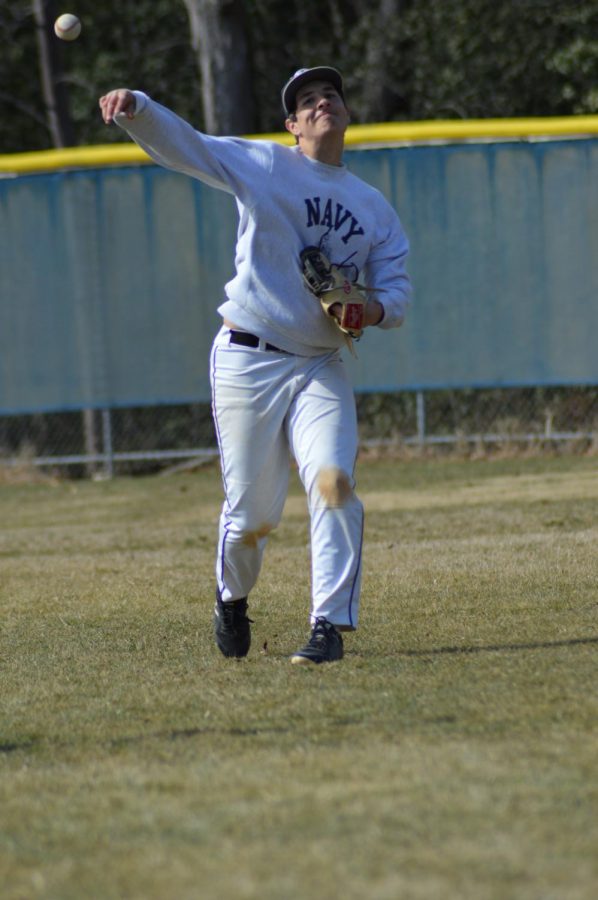 Junior Caleb Robinson warms up in the outfield before practice begins. This is Robinson's first year playing varsity under Coach Eric Milton.

Milton was first round draft pick for the New York Yankees in 1996. He played eleven years in the majors for the Minnesota Twins, the Philadelphia Phillies, the Cincinnati Reds and the Los Angeles Dodgers. Prior to the MLB Eric Milton attended and played baseball for the University of Maryland leaving after his junior season. This year will be his seventh season coaching Severna Park High School varsity baseball.

Current SPHS varsity baseball athlete junior Evan Lewis, a junior talked about the difference between coaching styles of Eric Milton and coaches from when he was younger.

“He has a lot of experience with being a major leaguer so he has a lot of knowledge about the game,” Lewis said. “ And it’s a very helpful resource for me.”

Severna Park has come up short to Howard in the state championships two years in a row and this season Milton is trying to learn and add new things to his workouts to win state championships this year. With the season just starting junior and first baseman for the varsity team, junior Brendan Simonds spoke of the feeling of the team and what Milton’s beliefs and standards are for the upcoming season.

“It’s a lot better…environment” Simonds said. “And the expectation of every year we are going to win a state championship.”

Simonds also plans to play baseball in college and being on a team with Milton as the head coach gives him an advantage with talking and being exposed to certain colleges. Milton already has the University of Maryland and other schools coming to see a few of the upperclassmen playing on varsity who wish to continue their baseball career in college.

“He’s talked to different coaches for me,” Simonds said. “He has done a big big part.”

Throughout Milton’s entire career the coach who influenced him the most was his head coach during his collegiate years.

“I learned a lot at the University of Maryland from Erik Bakich,” Milton said. “He’s the reason I got into coaching and the reason why I’ve been successful.”

Developing under Bakich, Milton developed his coaching style. Discipline and routines were a big aspect of what Milton took away from his years at UMD. He is always open to new ideas and trying new things but still uses what he learned from Bakich in his Severna Park team in order to make his players the best they can be.

“I think baseball is a lot of routines and doing stuff on a daily basis,” Milton said. “That’s the way you get better at it.”

SPHS varsity baseball practices Monday-Saturday for two hours each day. The athletes are always together at these practices, at games and at team dinners. To Eric Milton they are all a family. He stresses family and being part of a team though the season is short. He wants his legacy to be exactly that: family.

“I see kids that I haven’t coached in seven years coming back and coming to the games and coming saying hello” Milton said, “knowing that I’ve had something to do with their success.”

Coach Milton and his varsity baseball team hope this year brings them luck and success at the state championships.  Third time’s a charm.