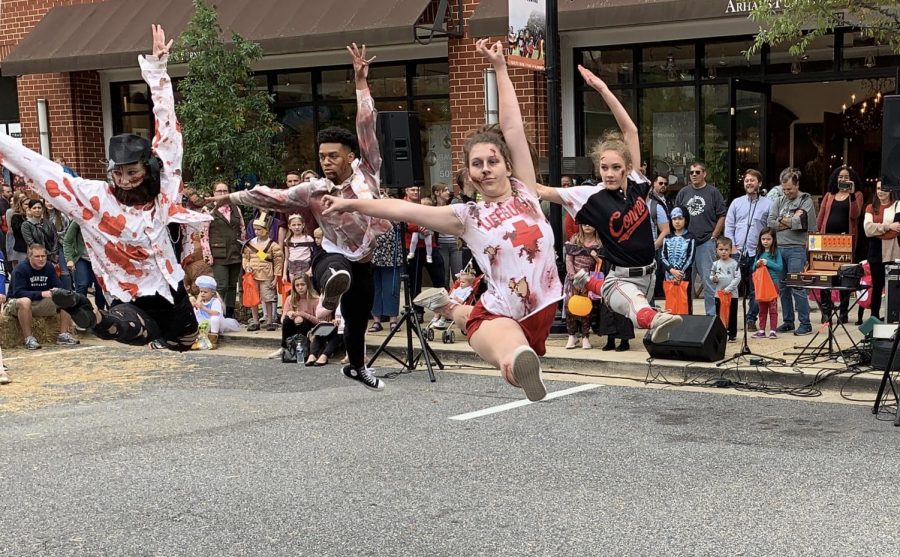 Annapolis Towne Center’s annual Fall Fest was on Oct. 26 to celebrate Halloween with activities including trick or treating, pumpkin painting, a hay maze and a “Thriller” dance performed by the MPAC’s Elite Company dancers.

The Maryland Performing Arts Center (MPAC) has been performing at Fall Fest for “almost ten years now,” Kelsey King said, who is the owner and Artistic Director for MPAC. Preparations for this dance began back in the summer, when the Elite Dance Company members learned their routine for the year. Although the choreography has been altered throughout the years, it stays mainly the same and includes both original choreography and “a section that is like a tribute to the music video,” King said.

Dancers were prepared to scare in full makeup, costume and even hair while they performed. Each dancer gets very creative in making their own costume by ripping them and tearing them, putting fake blood on them and “some of them run them over and get them dirty,” King said.

When it comes to going full out, the Elite Company dancers never come up short. Dancers also used makeup to look like zombies, as some “have developed a system over the years…using tissue paper and liquid latex to make fake gashes,” Elite Dance Company member Kate Stefancik said.

The “Thriller” audience got up close and personal with the dancers, since there was only a line of caution tape attached to stakes sectioning them off from the performance. Although the audience did get spooked while watching the dance, people “really appreciate keeping “Thriller” alive because there’s so many Michael Jackson fans still out there,” King said.

Dancers are expected to be in full character from the moment they walk out of the waiting area until the moment they return. They love becoming the characters they choose, and really embrace their part in the performance.

“I love scaring people during the performance, especially the kids, even though I feel bad if they start to cry,” Stefancik said.

The youngest of the dancers dressed as roadkill, portraying everything from cats to unicorns that didn’t end up having the best day. Costumes for the older dancers varied from lifeguards to creepy clowns; there were no two dancers alike except for their underlying zombie appearance.

Dancers preformed “at the top of the hour, so twelve o’clock, one o’clock, two o’clock, three o’clock, and four o’clock” Kristy Cooke said. Cooke is  MPAC’s General Manager and coordinated the event with Annapolis Towne Center.

Cooke went on to say that the Elite Company will also be performing at Annapolis Towne Center’s Tree Lighting Ceremony to kick off the holiday season on Nov. 23.